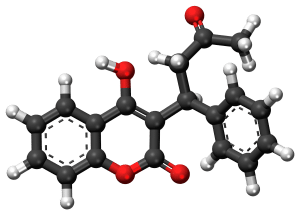 Ball and stick diagram of a warfarin molecule

a medication which is used as an anticoagulant to prevent stroke in people with a variety of heart issues ranging from atrial fibrillation to diseased heart valves as well as deep vein thrombosis and pulmonary embolisms. [1][2]

Warfarin is not a blood thinner but, rather, works by blocking the blood’s clotting mechanisms.

Dosing of warfarin is extremely complicated as it has many interactions with other medications as well as a variety of foods and should be constantly monitored.  Doctors use a reading of the International Normalized Ratio (INR) to check your Warfarin dosage.  The INR test simply measures the ability of your blood to clot with normal speed being one and slower greater than one.  Normally a patient would be set a target level of 2-3, but it can be as high as 4.5 for patients with mechanical heart valves. Your dosage can be adjusted to match your diet.

Warfarin began its life as a commercial rat poison and it is, often, jokingly referred to as that. However, it has been approved for medical use for almost 70 years and has proven to be a lifesaver for many thousands of people, including me.